Every piece of art counts for Sea points!
Here's a breakdown of the points.
All Dragons must be at least a 200 pixel circle . Otherwise, they count as Simplified 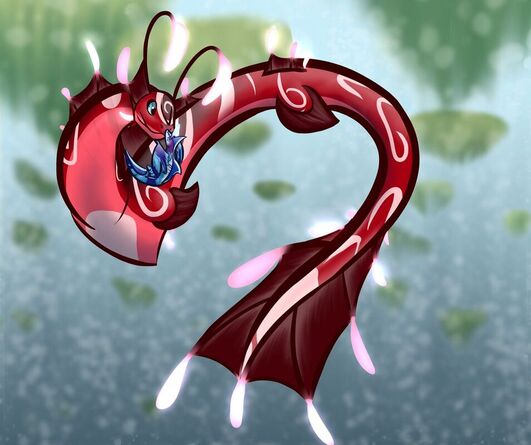 An element of a background: is objects or planes that are found within the image.
Such as:
- Light effects like sun/moon light and shafts, bubbles, and water surface and water effects like currents.
- Pebbles, Rocks, Shells, Plants, Coral, Ruins, Ships, Logs, and other Debris
- The Ground, Reef, Sea Mounts, Volcanic Debris, Skyline, Mountains, Hills, other Geographic Features.
- Crustaceans, Shellfish, Fish, Whales, Birds, and other Creatures.

Visual Background and Biome Element Guide can be seen here!

Animations will count each unique frame your dragon is in as if they are an illustrated piece.
You MUST list how many unique frames your dragon has in your animation.
​- The Base SP is counted using the base illustration points for characters.  This stacks for each unique pose that the dragon is in.
- Body Frames that have been reused/moved will not get counted more than once, as these are no longer unique.
- Background and biome bonuses will only count for the frames that contain the dragon's unique pose.
- All other extra bonuses will also count for each unique frame.  Such as the Companion, Exploring, Trials, Extra Dragon, etc.
- All passive bonuses via SP perk or companion will count per each unique frame.

The Animation Modifier will modify the final total by adding 10% of the accumulated SP together.
​
Examples:

The original may count for full points, but any pieces after using the same lineart will count as recoloured.
Recoloured may not claim the lineart or shading bonuses, only the coloured bonus below.

If art isn't up to your normal standard, they may be subjected to the Simplified modifier.
Commonly, we will reduce the points in the area that is lacking.  Such as shading.

If the art falls below 300x300 pixels, or it looks rushed or rather messy, then we will apply the simplified modifier.  This will take the total SP that was being claimed, and divide it in half.

Anthro and Other Forms:

We do allow dragons to be drawn in anthro forms, or as other species.  These forms will count for SP as well.
However, they will only be able to be redeemed as general art, and cannot be redeemed for items or rewards.

We do allow dragons to be drawn in Adult content.  These will count for SP as well.
However, they will only be able to be redeemed as general art, and cannot be redeemed for items or rewards.

Adult content must be posted on the Red Curtain side of PaperDemon, and can only be shared in the Red Room Channels of discord.
Artists must be 18+ in order to participate in our adult sections.
G-0N3EDE506G