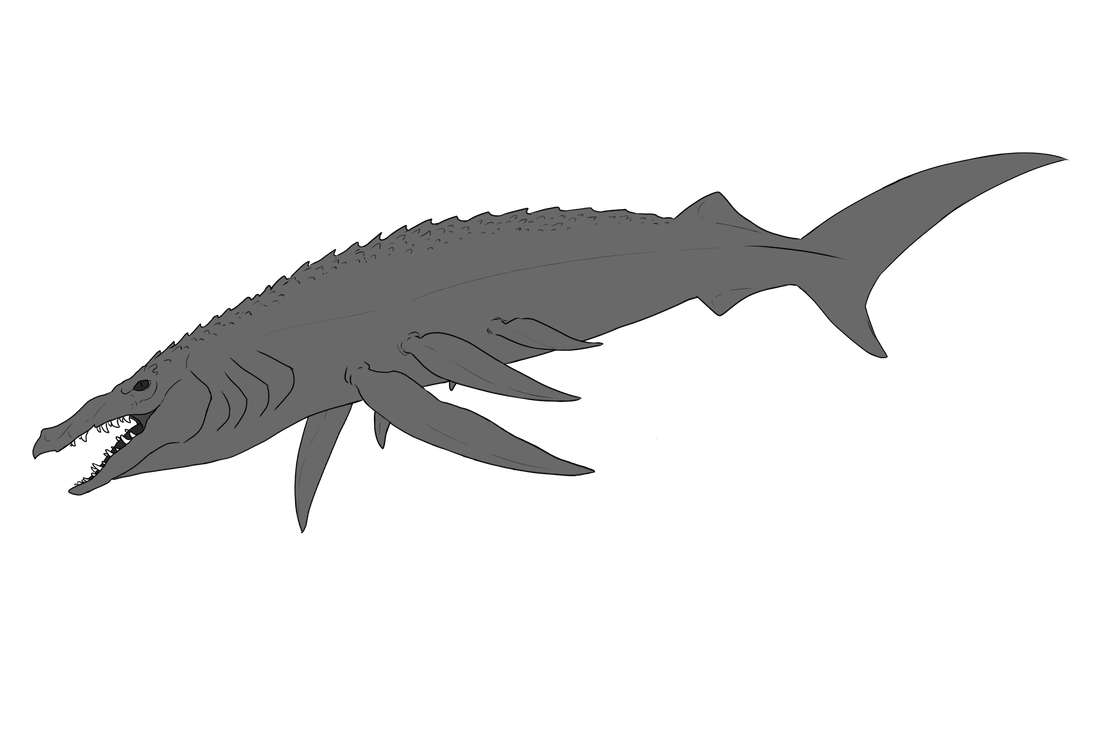 The Swamp Skimmer is one of the largest and meanest freshwater Aqrion Aquella has to offer.  They are built tough!
They have very thick hide with tough scales along the topline.  Their jaws are able to bite through almost anything they can find.
Due to the swamps that they primarily inhabit, they have an excellent sense of smell.  Their eyesight isn't the best compared to a lot of other species.  But it's still pretty solid.
They have three pairs of flippers for locomotion, which can also be used to dig in the sand.   Their tails are large and strong, able to achieve huge bursts of speed.  They can even launch themselves clean out of the water when stalking unsuspecting prey above them.

Swamp Skimmers are primarily carnivores.  They not only eat fish, but also land animals as well.

Swamp Skimmers lay eggs.  They burry them in the warming sands during the spring, and guard over them until they hatch.   Commonly, the mother is the primary parent when raising the young.  The male often is involved, but he is known to hunt and bring food for both the mother and young.  In more current days, both genders assume the 'mother' role, and they trade off hunting and watching of the pups.

Swamp Skimmers watch over their young for the first year.   After which they stick around the town, learning and challenging each other to become stronger.
They reach maturity at the age of 3.

Swamp Skimmers will often go through a pilgrimage stage in their life.  They usually begin this around the age of 3-5, and may take up to 5 years to complete.  Once they return, they share their learned knowledge and any new fighting techniques they have learned along the way.

Swamp Skimmers live to an average of 80 years.

Swamp Skimmers have evolved from various crocodile species, and the bullshark.  One of the larger continents contains the worlds largest freshwater swamp, Tethria.  Tethria is a swamp at the center of the continent.  This very rich and diverse landscape is able to host the largest and most aggressive freshwater dragon, and all of it's other inhabitants.
Swamp Skimmers love to explore, and will do so up the rivers into new lakes, and even venture over land to discover new freshwater homes.
G-0N3EDE506G