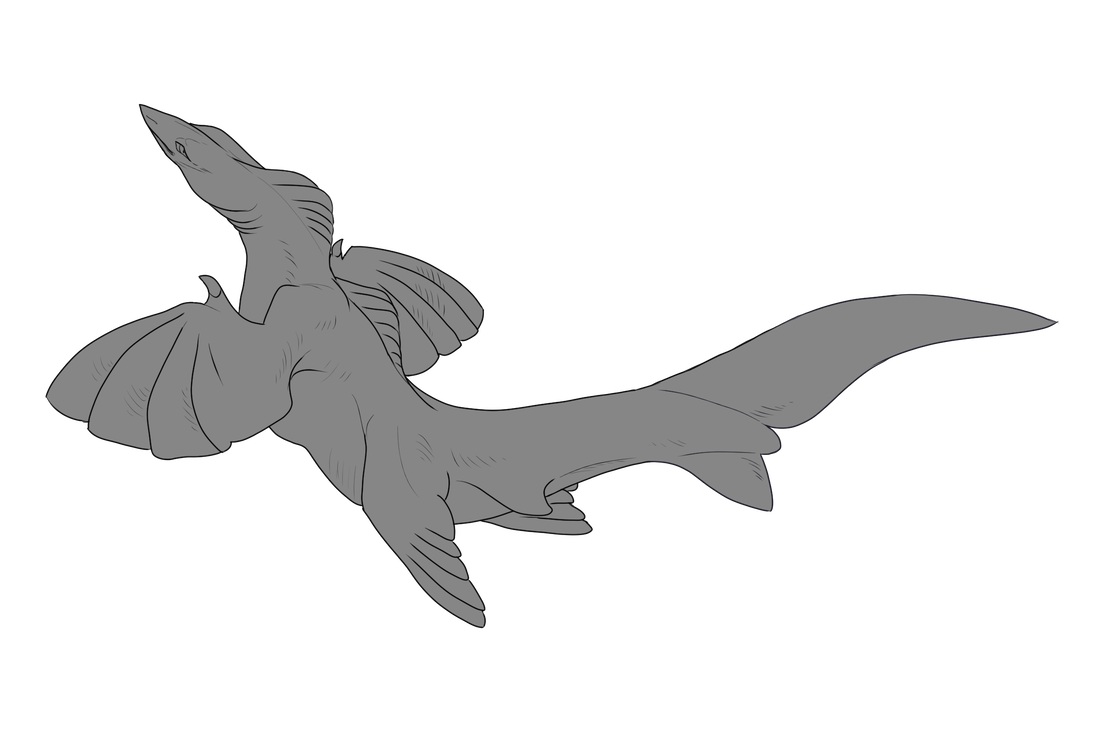 The Sea Skimmer has evolved to life in the open ocean.  They are streamlined, agile and have high endurance. Their bodies may not be as flexible as the Giant or Abyssal, but it doesn't need to be.
Able to turn on a dime and can have sudden bursts of speed.  Excellent for catching prey while in the ocean deserts.  Their tails are more rigid, similar to sharks, enabling them to have great strength for swimming and slapping an opponent in the face.  Once at high speeds, they often leap out of the water and glide using their four wing-like flippers for a short distance.  This helps them travel great distances while allowing then to rest and survey for upcoming islands.

Their sense of sight and smell are impeccable.  They are the prime hunters of the ocean!
​
Sea Skimmers are the nomads of the open ocean.  They spend time traveling between the tropical lagoons in search of food.  They are opportunistic feeders and are not picky about their food.
Those that settle often live around the Floating Isles, which drift around the oceans currents.
Others prefer a less nomadic life, choosing instead to inhabit the remains of a once above world city.   These Sunken Spires provide relieve and a place to live in the otherwise ocean desert.

- Often lacks membranes in place of cartilage.
- Rigid tail is extremely strong.
- Very large Flippers create 'wings' and allow them to glide over water for short periods of time.

Sea Skimmer's love a good chase for their meals!

Sea Skimmers are very nomadic, and thus have no time to tend a nest.  They, like polar Aqrion, give birth to live pups.  Very similar to sharks, they hold onto their eggs and hatch them inside their bodies, releasing them when they are ready to fend for themselves.

They usually inhabit warmer waters, so can give birth at any time of the year.  They incubate and grow rapidly in the younger stages of life, reaching maturity at the age of 2.  Once at an adult age, they grow much more slowly.

Sea Skimmers tend to continue to slowly grow their entire lifespan.  They are often solitary creatures, gathering during the summer to reproduce with other members.

Sea Skimmer's are known to reach ages of 300 years old.

Sea Skimmer's are closely related to sharks.  After the Great Nuclear War occurred, creatures of the ocean began to grow larger in size.  The sharks, with their perfect evolutionary traits, were no longer enough to stay top predators and began to decline.

Those sharks that managed to grow larger, stronger, and evolve new abilities were able to pass along these genes creating a new species.  The Sea Skimmers live for speed and with their newly found gliding ability, they rule the open oceans.
G-0N3EDE506G