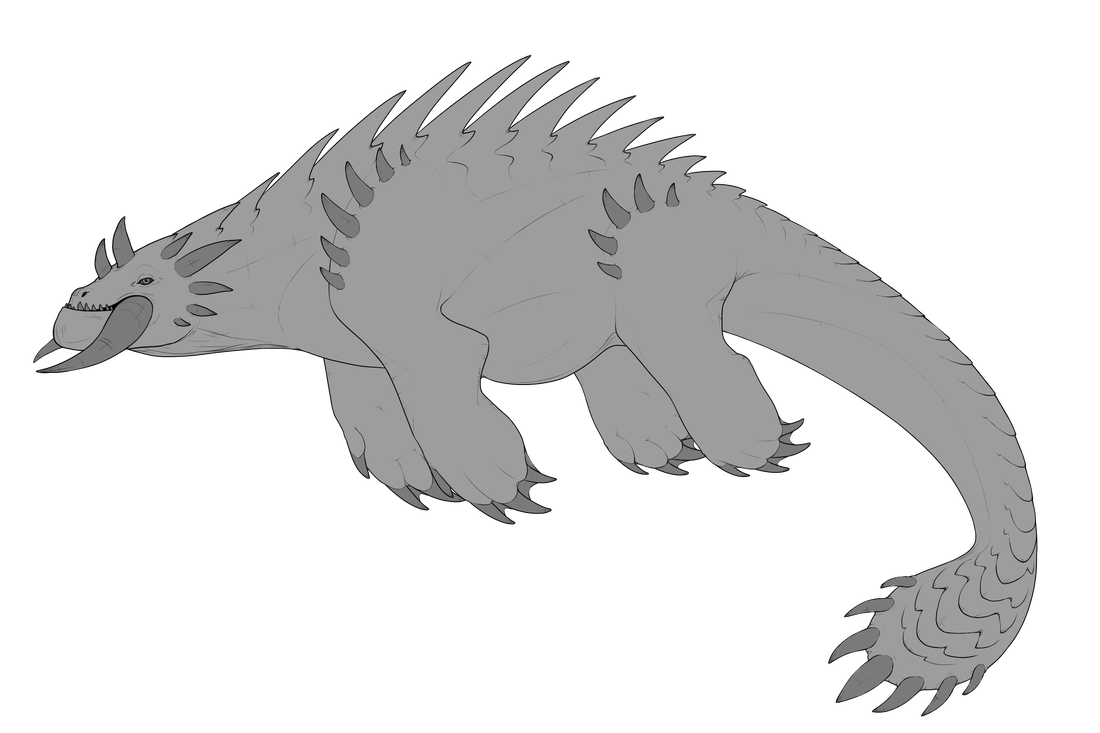 The Polar Aqrion are slightly smaller than the Giants and quite a bit heavier.  Their bodies are well suited for life in the polar seas.  They have more blubber on their bodies to help keep them warm.  Their scales are much thicker, also aiding in heat loss.  The thicker scales are primarily used to protect themselves from the ice and shifting ice during storms.

They all have tusks protruding from their lower jaw, and a pair of dense horns on their heads.  These are used to break and scrape away ice keeping their passage-ways open.  These tusks can also be used as a weapon when threatened.  They also have talons on their flippers, these are used to help scrape ice out of the way as well as pull themselves up onto the icy or rocky surface above for a quick sunbath.

Polar Aqrion are often migratory.  Following the currents with richer foods, or warmer waters.  Some move to warmer waters during the coldest parts of winter, while other simply stay and endure the cold.

Polars are mostly pescavores.  But they do enjoy the occasional plant when swimming in warmer waters.

They prefer Char, Cod, Halibut and many Crabs.

Polars don't lay eggs, instead, they give birth to live young, similar to sharks.  They take a lot longer to incubate, often up to a year, and are slower to grow.

Polar Aqrion time their births so that they are during the spring.  They travel to warmer waters to give birth, and wait there for their young to strengthen enough to make the trip back to the polar regions.  Ideally, they return during the summer, where the waters are both warmer, but the prey is most abundant.

Polar pups remain in their parents care for up to 3 years before capable of fending for themselves.  Polars aren't as social as the Giant species.  They may not form large cities, but they do enjoy the company of others.  Most often they travel in family packs.

Polar's lifespan is on average 300 years.

Polar Giants were originally a species similar to the Horned Lizard.  When the Great Nuclear War was happening huge chunks of land were bombed and dispersed, as well as sunk.  These poor little lizards had gotten caught up in the drifting and sinking masses of land.   Their armored little bodies managed to survive and later adapt to their new icy surroundings.

Of course there are no longer bugs in the cold polar regions, and one must survive.  Somehow, they had managed to venture into the icy waters and began to munch on crustaceans.

Once the war settled, and along with the help from the radiation, the new species managed to grow into what we know today as the heavily armored Polar Aqrion.
G-0N3EDE506G