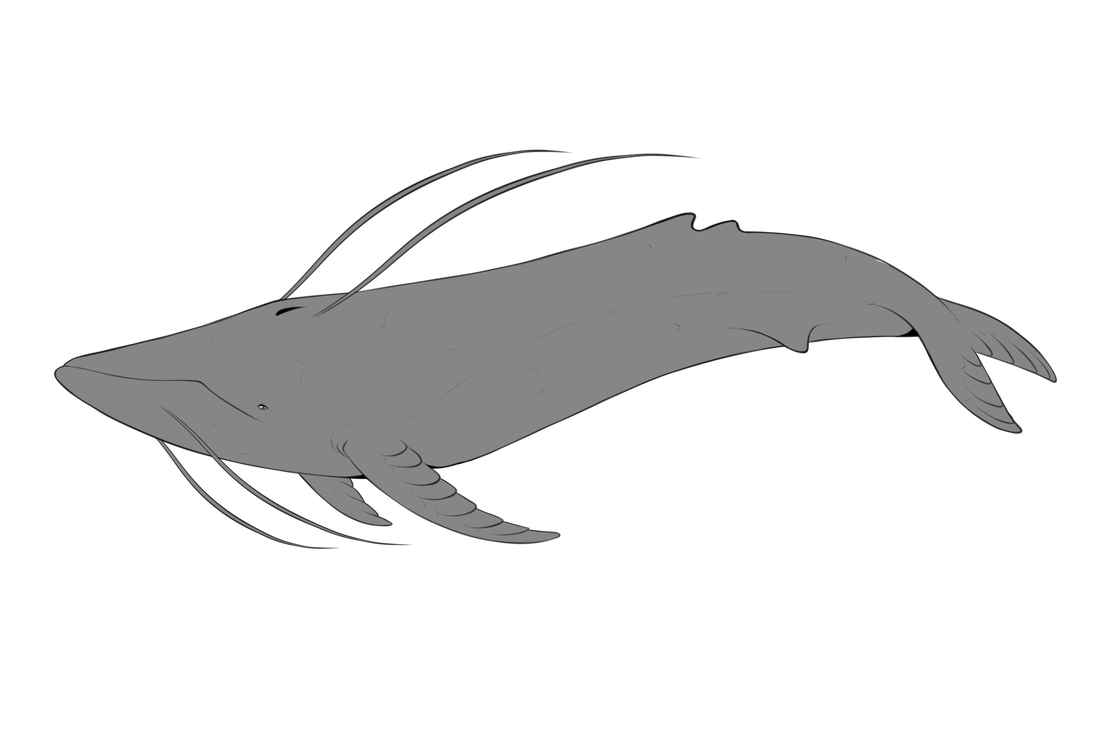 The Fluke Singers are the largest of creature in the world.  Despite their massive size, they are one of the world's friendliest creatures.  They spend most of their time roaming the open oceans.  They are primarily solitary, but they do form small pods with couples, close friends or family.

They are known as the world's singers.  Their song is often long and deep and can be heard over long distances in the oceans. They have a wide range of sounds and melodies that they use.
It is not uncommon to invite Fluke Singers to celebrations.  They love to sing for others.

Fluke singer's have a unique trait, they are covered in tiny feathers!  These feathers are very dense, much like penguin feathers.  No one knows why they have evolved this way.  Some believe it helps them slide through the water with minimal effort.  Most folk view the Flukes as regal with their feathery bodies and extra long whiskers.

- Covered in fine waterproof feathers, similar to a penguin
- Has whiskers!  These function like many animal whiskers.
- Have the most complex songs of all Aqrion
- Lack fin membranes in place of cartilage.

Despite their massive size, Fluke Singer's prefer to eat many tiny prey.  Krill is their primary food source.

They prefer: Krill, Herring, as well as many other small fish and shrimp species.

Fluke Singer's give birth to live pups, similar to mammals.  They also nurse their pups with milk.​

​They are much slower at growing and reaching maturity than their cousin, the Phin Singer.   They reach maturity at the age of 20.  They slowly get larger every year until reaching their adult size.

Their whiskers are unique in that they never stop growing, albeit at a slow pace.  Their whiskers can be trimmed.  They may be extra sensitive for a few days, but heals just like a cut on our skin does.

They live for about 800 years on average.  If conditions are favorable, they are able to live longer.

No one really knows how the Fluke Singer's came to be.  There are stories that the angels in the stars flew down and placed them on this planet.
They have an uncanny resemblance to the Baleen whales that once inhabited this planet several centuries ago.  They most likely evolved from the baleen whales, but popular belief is that they are descendants from the stars.
G-0N3EDE506G