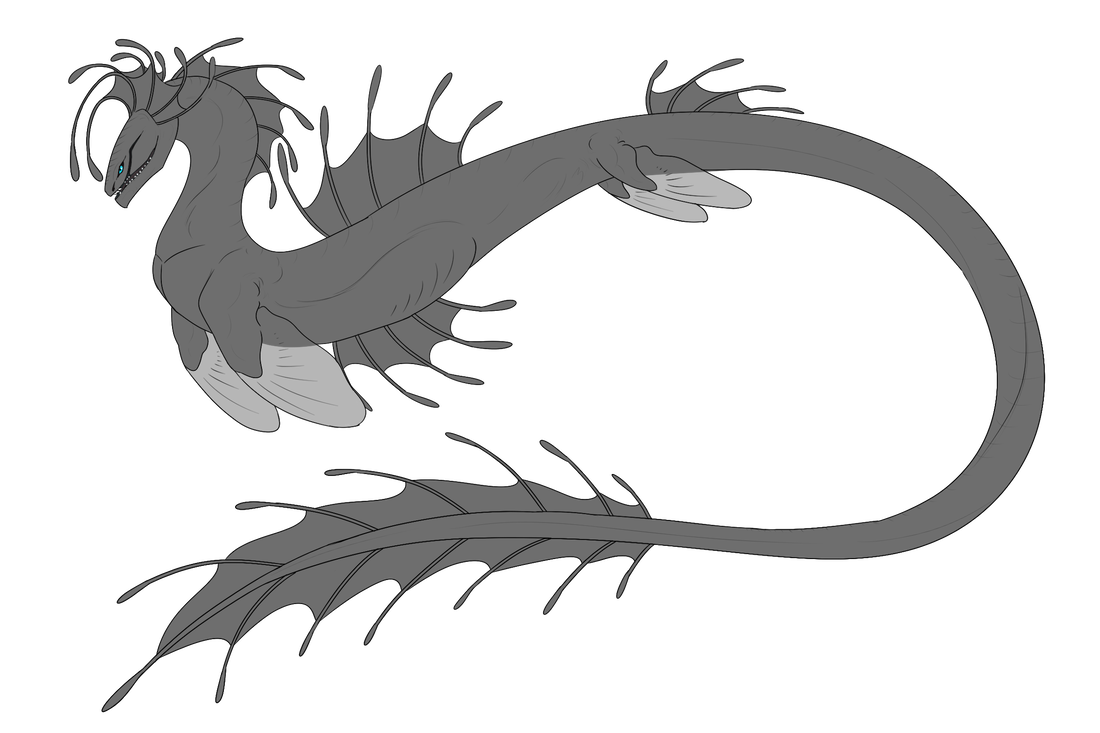 Abyssal Aqrion are very long and lightly built compared to their Aqrion brethren.  Adapted to living in the complete darkness of the ocean floors, Abyssal's are built for effortlessly drifting through the water.   With their unique jaw set and their streamlined bodies, these Aqrion are the top predator in the ocean's deep.

The jaws of an Abyssal Aqrion split into four, allowing it to open it's mouth around any potential meal they may find.  They can however lock the cheek jaws with the top jaw, appearing less intimidating to other Aqrion types.  The split jaw function is primarily used for hunting and battles.

The bio-luminescent nodes on the end of their spines are not only used to confuse their prey or foes. But is also used to communicate with other dragons.  They are able to control their "light" turning it on, off or dimming it whenever they please.  The highly sensitive spines are used to help them navigate through the dark waters.

- Bio-luminescent nodes on the end of the spines. - Used for communication and defense.
- Flippers are membranous, used more for balance rather than propulsion.
- Jaw can be opened with the one hinge, or cheeks unhinged.

Abyssal Aqrion are opportune feeders.  Meaning that they eat what they can find or hunt.  Food is often very scarce at the bottom of the ocean.

Abyssal Aqrion take a more unique approach to laying their eggs.  Unlike the Giants, who lay and tend to their nests,  Abyssal's will bury a clutch of eggs in the mud.  Often the eggs are not buried together in the same nest.  After burying the eggs, they abandon their nests. They make many fake nesting holes that are void of eggs.  This odd method actually increases the chances that their eggs won't be found be other smaller predators.  Once the eggs are close to hatching, the parents both will return, gorged on food for their young, to protect the eggs until they hatch.  Once hatched, the parents usually hold their pups close with their finned flippers until the pups can manage on their own.

Abyssal's are very slow to grow, and rely very heavily on their parents.  It may take upwards of 30 years before a pup grows into an adult. Which most other species require 3-10 years.

Due to the longer growing stages, and the environment they live in, Abyssal's tend to be really close to each other.  Forming social tribes of a few different families.  These tribes often all congregate together during "mating seasons", which may happen every 10 years, where tribes often merge or split.  These mating seasons are usually a large boom of food falling from the surface, such as during nasty storms.

The Abyssal's are one of the longest lived Aqrion and can reaches ages of up to 1,000 Years old.  Abyssal's are unique in which they never stop growing.  The oldest of Abyssal's often surpass the average adult size.

The Abyssal Aqrion originated from deep ocean eels or hagfish.  We still aren't too sure.  They are incredibly elusive and almost impossible to find outside of deep ocean biomes.

We guess these guys had originally consumed any nuclear waste that had sunk during The Great War.  Which has enabled them to grow to massive lengths and may give them their characteristic glowing features as well.

Due to the many mysteries of both the species, their origins, and the biomes they live in, they are often thought to be Void worshippers.  The Void is viewed as corrupting and evil.  The Abyssal's have often endured much prejudice in the past.  And while in current day it has improved drastically, there are some who still view the Abyssal's as evil Void worshippers.
G-0N3EDE506G